After Westgate, assessing a terrorist group’s “strength,” “weakness,” and strategy

Posted on November 9, 2013 by Andrew Wojtanik 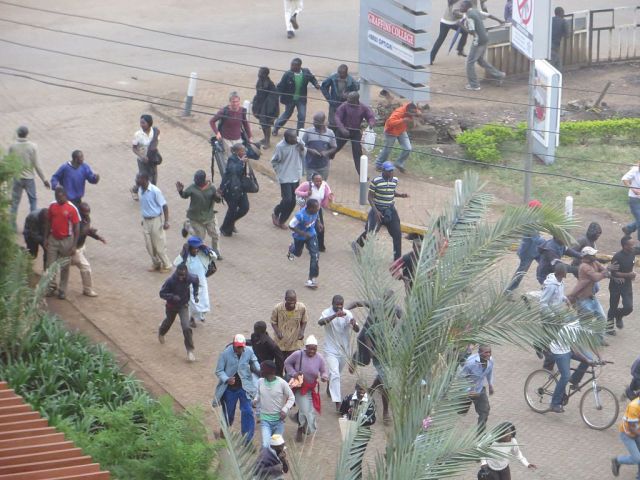 One of the principal analytical errors committed by journalists and “experts” in international affairs is to hastily transform a singular data point into a “trend.” A case in point: after the recent, horrible terrorist attacks at the Westgate Shopping Center in Nairobi, Kenya, the foreign policy community was abuzz with the “return of al-Shabaab.” By killing 61 people in a neighboring country—its first significant external attack since 2010, the Somali insurgency-cum-terrorist group, so it seemed, had made all too clear through Westgate its growing “strength” and “resilience.”

Yet it was refreshing to see that not every analyst fell for this deceptive trick. A slew of observers were quick to note that the attacks, though successful in grabbing the world’s attention, may in fact reflect al-Shabaab’s inherent weakness. For example, Adam Nossiter had a quite good story in the New York Times, where he uses several data points (an AQIM offshoot’s attack on a Western-owned oil facility in Algeria in January, twin strikes on government installations in Niger in May, regular attacks in Nigeria) to flesh out the thesis:

“As devastating as these recent attacks have been, they may actually have more to do with the challenges confronting extremist groups than with any newfound jihadi strength in Africa, analysts contend. In each instance, these eruptions have occurred as radical Islamist movements were on the defensive, under threat by international, domestic or sometimes even local forces.” (New York Times, 9/25/13)

This argument syncs with the foundational academic literature on terrorism—Martha Crenshaw, Robert Pape, etc.—which clearly roots terrorism in the context of “asymmetric” warfare. This is the idea that the use of suicide bombings, ambushes, and the like reflect a group’s conventional inferiority in war. This backdrop of asymmetry impacts a terrorist group’s strategy—the approach that a terrorist group takes to match its objective. It is here where both the “rise” and “decline” perspectives fall short.

If forced to choose, the extension of the latter argument—Westgate as a symptom of al-Shabaab’s breakdown—seems better-supported than the former. However, neither is a sufficient diagnosis of al-Shabaab’s current state, and, in particular, its strategy. Consider three points about al-Shabaab and its fellow Al Qaeda affiliates.

1) Buzzwords sell. I will not dwell too much on this topic, except to emphasize that both “strength” and “weakness” are of course oversimplications of a complicated issue—better suited for headlines or Congressional quips than incisive analysis. Here I will direct you to my friend and former classmate Dan Solomon, who parses the alternative meanings of a group’s “strength,” in an insightful piece here.

2) Terrorist strategies are rarely zero-sum. The “weakness” thesis suggests, at its core, that terrorist groups cannot have their cake and eat it too. As Dan Byman, a serious terrorism scholar, argues, history suggests that Islamic groups turn more exclusively to global jihad or embrace the “Al Qaeda brand” after suffering defeats in domestic insurgencies. He notes that the weakened remnants of the Armed Islamic Group (GIA) in Algeria turned to the Al Qaeda “brand” in 2006 in an attempt to revive the humbled force. The result was a repackaging and name change: Al Qaeda in the Islamic Maghreb. Similarly, Byman pegs al-Shabaab as an example of the “dangers of success”—after Western-backed forces ran al-Shabaab out of much of Mogadishu in 2011, the Somali insurgent group officially merged with Al Qaeda the following year. Piggybacking on the sudden wave of interest in al-Shabaab following Westgate, he implicitly draws a straight line from the group’s allegiance to Al Qaeda to a renewed emphasis on external operations…to the corridors of Westgate mall.

Byman’s commentary on the ever-morphing jihadist landscape is important, especially for policymakers tasked with thinking about counterterrorism. But as an analytical point, there are far too many counter-examples for the argument to hold.

Take Al Qaeda in the Arabian Peninsula (AQAP) in Yemen. On Christmas Day in 2009, for the first time in the group’s history, AQAP demonstrated the capacity and willingness to strike at the U.S. homeland. It was perhaps only Nigerian-born Omar Farouk Abdulmutallab’s incompetence in lighting explosives he had packed in his underwear that saved a transatlantic flight from Amsterdam to Detroit from disaster. AQAP followed the next year with another near-miss in 2010—so-called “parcel bombs” involving explosives shipped inside inkjet printers were intercepted in Dubai en route to the U.S. In May 2012, though it was revealed later that the CIA had “inside control” over the operation, AQAP again demonstrated a desire to strike targets outside Yemen in another plot to strike at Western targets outside Yemen. During this period (2009-2012), AQAP—unlike al-Shabaab post-2010—had a pervasive presence in Yemen and was doing just fine at home. Was AQAP’s incorporation of external attacks into its strategy a product of “weakness”? No, just as 9/11 and the 1998 embassy bombings were obviously not last-ditch, desperate measure by the Al Qaeda core to remain relevant.

Two other explanations provide a better yardstick: first, decisions to strike externally—i.e. against the “far” enemy—is better understood as a product of an ideological shift than a result of an internal audit of a group’s relative “strength.” In Yemen, the ideological view that it was important to both bring down the “near” enemy, or kufr (apostate Muslim regimes), and the “far” enemy (America, etc.) drove strategy—a change many credit with the inclusion of self-made “cleric” Anwar al-Awlaki in AQAP’s inner circle of decision-makers.

Secondly, terrorists, like investors, diversify. Al Qaeda’s affiliates are rarely either just a domestic insurgency or foreign terrorist group. Sometimes this diversification is driven by conscious agenda-setting at the top of a hierarchical organization (AQ core, AQAP). In other cases, it is ad hoc and could be driven more by bureaucratic differences within the organization (AQIM, Boko Haram, al-Shabaab). Which leads to my third point…

3) Terrorist groups are not unitary actors. Terrorist groups, like governments, almost always comprise several (sometimes disputatious) factions. Decisions on who and what to target can drive deeper wedges between those factions. Take the example of Boko Haram in Nigeria—in January 2012, an offshoot (now called Ansaru) publicly broke with Boko Haram largely because of frustrations with the group’s brazen attacks against innocent Muslims. Ansaru consequently concentrated on kidnapping and killing non-Muslims, especially non-Nigerians.

Al-Shabaab is equally, if not more, disputatious. It is perhaps no surprise that Westgate followed the rise of Ahmad Abdi Godane, instrumental in the merger with Al Qaeda, and his consolidation of power over competing factions. One could draw a correlation between Godane’s past focus on external operations (including the 2010 bombings in Uganda)—even while other factions focused more on the local fight—to the emergence of the Westgate plot. This is not to say that Godane’s rise means al-Shabaab’s strategy has shifted—only that that strategy is multi-faceted, fueled both by diversification and internal divisions. In some ways, it is not even disciplined and organization, but ad hoc.

In essence, the “weakness” argument falters for the same reason as the diagnosis of al-Shabaab’s “strength”: a singular data point, unless coupled with a considerable deal of other evidence, is insufficient for discerning a larger trend. Furthermore, weakness and strength are more buzzwords than anything. If more external attacks occur, or the analytical community gains new insights into al-Shabaab’s strategic choices, the assumptions that al-Shabaab is (a) shifting its strategy to emphasize external operations and (b) doing so because of an inherent decline in power at home may yet be reinforced. But for now, one must be cautious not to make mountains out of molehills.

3 Responses to After Westgate, assessing a terrorist group’s “strength,” “weakness,” and strategy